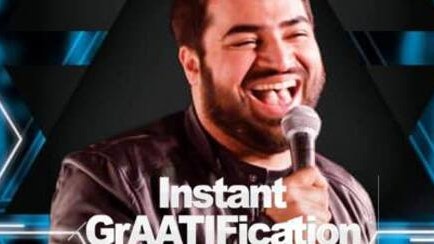 Aatif brings his hilarious assault on the impatience and entitlement of the 21st Century experience to Birmingham for a very special extended show.

Aatif Nawaz is an award-winning British-Pakistani television
presenter and stand-up comedian. He has also won acclaim for his
acting, filmmaking, radio presenting and writing.

One of the most respected acts on the circuit, Aatif has built a
reputation as one of the most popular British-Asian comics in the UK.

In 2014, Aatif performed his debut solo 60 minute comedy show ‘Talk
Roti To Me’ in front of 4 sell out crowds at the iconic Leicester Square
Theatre in London.

This was followed up by Aatif’s critically acclaimed ‘Muslims Do It 5
Times A Day’ comedy show which played to 11 sell-out audiences in
London’s West End. The show was also Aatif’s debut at the Edinburgh
Fringe Festival in 2015 and was attended by over 1800 people. Popular
with critics and audiences, the show then toured the UK as well as a
sold out show at the 2016 Leicester Comedy Festival.

In 2016, Aatif debuted ‘AATIFicial Intelligence’, a brand new comedy
show reflecting on his experiences of appearing on Channel 4, writing
for the Guardian and other dalliances with mainstream media. The show’s
performances at the Edinburgh Fringe Festival and it’s subsequent UK
tour earned unanimously strong reviews from critics and audiences. He
ended the year with a UK Comedy Tour in aid of the charity Human Appeal
that raised over 2 million pounds from it’s 25 shows in 20 cities.

In 2017, Aatif made his BBC Radio 4 presenting debut
with ‘Clockface’, a programme focused on the history of time. He also debuted a brand new comedy show called ‘The Last Laugh’ at the Edinburgh Fringe Festival.

In 2018, Aatif featured in national commercials for EasyJet and Black & Decker. He also began hosting a weekly podcast on BBC Radio 5 Live called ‘The Doosra’. Aatif appeared on the popular Sunday Morning
Live programme on BBC One. He toured Malta three times to perform for Maltese Funny Business, including 4 hour long shows at the Valletta Campus Theatre. In August, he debuted his brand new stand-up comedy show
‘Instant GrAATIFication’ at the Edinburgh Fringe Festival. The show wasAatif’s most acclaimed yet, receiving accolades and strong reviews from The Guardian, Evening Standard and Daily Mirror to name a few. The show
will tour the UK in January 2019 including a special extended performance at London’s 450-seater Leicester Square Theatre.

Since 2014, Aatif has been a regular presenter for the popular lifestyle programme ‘Living The Life’ on the Islam Channel. He has made recurring appearances on BBC Asian Network, BBC Radio 5 Live as well as
being a panellist on BBC Two’s Newsnight programme. He featured on Channel 4’s ‘What British Muslims Really Think’ documentary and began contributing columns to The Guardian.

In 2012, Aatif won an Honourable Mention Laural at the Los Angeles Movie Awards for his documentary Postcards from Lahore. The film also holds the distinction of being the only Pakistani film to be screened at the 2013 Cannes Film Festival.

His work on The Aatif Nawaz Show and ‘Living The Life’ earned him two nominations for MOMO (Music of Muslim Orientation) Awards for Best Television Presenter and Best TV Show.